If you want to experience a local Chengdu tour, then one of the best locations to visit is the Kuanzhai Alley ancient street. This street comprises of three paralleled alleys that are as long as the Qing dynasty. What makes this place so attractive is the local Chengdu cuisine, Sichuan snacks, ancient architecture and handicrafts.

Our Chengdu tour guides have vast knowledge of the local city and can speak fluent English. This makes for a rather pleasant experience while enjoying the scenes with an experienced Chinese tour guide.

If you love spicy food, then you should know that Chengdu is known for its spicy food. The Sichuan Hot Pot is like the staple dish of the place. It is delicious as well as very spicy.

One cannot miss out visiting the Sichuan Opera known for its unique magical face-changing performances. The traditional Sichuan Opera is regarded as one of the best all over the world.

The main attraction of this city is the four panda bases namely- The Wolong Panda Research Center, Duijangyang  Base, Bifengxia Giant Panda Base and the Chengdu Giant Panda Breeding and Research Base.  Chengdu is the treasure trove of Giant Pandas in the world, and Chengdu panda tours should be on your bucket-list when you visit this place.  Now, who doesn’t love pandas? If you want to hug, feed and play with the pandas, then this place is a must-visit. Panda tour China is just what you need. You can also volunteer s a panda keeper for one day in the Duijangyang Panda Base. 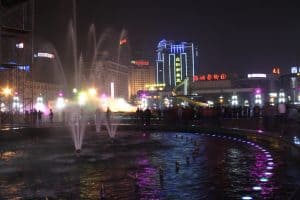 The city offers many other attractions such as Mount Qingcheng-known for its cultural and historical sites along with a serene and blissful scenery. The giant statue of Buddha located in Leshan town is like a mountain by itself. It is beautifully carved out of a mountain and is a busy tourist spot. For those who admire nature, a must-visit is the Singdu Gui Lake. This lake is famous for the large-sized, bright and colorful lotuses that bloom here.

The city of Chengdu is one of the most attractive, modern and busy metropolis in the Sichuan Province. Whether you’re taking day trips from Chengdu to somewhere else, or just want to experience a Chengdu city tour. It is the capital city of the province under the People’s Republic of China. The city was built by Zhang in 316 BC and is known to be one of the oldest cities in the world.

The city has a history that dates back 2300 years ago and is also one of the cites in China that has retained its original name and location throughout its long history. The city was named” Chengdu” by the fifth Kanming Emperor during the 4th century BC. The Chengdu plain is also known as the birthplace of Chinese nation due to the developed bronze civilization of the Shu country which was located here.

During the Han dynasty, Chengdu was known as the “Brocade City” because of its exquisite weaving and Shu brocade. It also became the birthplace of tea culture during this time. Chengdu was also named as “Hibiscus City” during the reign of the Five-dynasties, because of the ruler Meng Chang, who planted hibiscus trees all around on the city walls. This place is full of interesting stories to tell due to its long history of republican, imperial and communist eras. I will be glad to share with you more facts and details about this amazing place if you request for a free quote, on the right side of the page.

To hire a Chengdu tour guide just fill out the form on this page to request a free quote.