Since Yunnan has unique ethnic cultures with diverse languages, a good Yunnan tour guide is necessary if you want a fuller experience of this place. As you fill out the free quote request, you can be sure of an interactive Yunnan tour guide, who will give you the best of everything including a Yunnan group tour. We provide tour guiding in China throughout many different cities. The first place to visit during the tour should be the ancient town Lijiang, which is one of the UNESCO World Heritage sites. The main settlers in this town are the Naxi people. The place is beautifully preserved and hosts a number of incredible Naxi architecture.

Yunnan is considered to be the most diverse province under the People’s Republic of China. Located in the southwest of China, it spans a total area of 394,000 square kilometers with a population of approximately 47.7 million. The province shares three international borders with Vietnam, Laos and Myanmar. Yunnan has a mountainous terrain with most of the population residing on the eastern side of the province. The weather is pleasant throughout the year, so anyone from anywhere can visit this beautiful place whenever they like.

Yunnan province has been ruled by many dynasties and has one of the most interesting histories in China. It boasts of rich cultural diversity with 25 minority ethnic groups presently residing in the province. It is home to a total of four UNESCO World Heritage sites. This place will fulfill the hearts of any historian because of its amazing historical heritage. Yunnan is also a paradise for nature lovers because of its rich biodiversity. It has the largest diversity of the plant kingdom in the whole of China. It is also designated as the “Center of Plant Kingdom”. 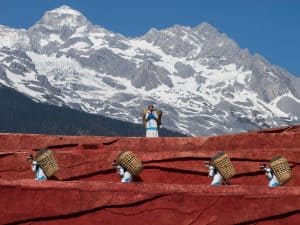 To get a taste of famous local dishes, I will take you to Kunming, the capital of Yunnan. This is the most favored tourist destination because of the beautiful flowers that spring all year round. It is also known as- the City of Eternal Spring and a full day Kunming tour is a necessity. A must-try delicacy is the Shaguo Mixan Rice noodles, which is commonly are available on the street side stands in Kunming. It also has a varied ethnic culture with a large population of an ethnic minority.

Another fascinating attraction in Yunnan is the Stone Forest. It is only 83 km away from Kunming, the capital of Yunnan. The Stone Forest forms a beautiful labyrinth of stones that date back to 270 million years ago. The forest area was under an ocean before and is basically a set of karst formations. If you need a Kunming travel agent, contact us through one of the forms on this page.

Known as the “Kingdom of Plants, Xishuangbanna is another hot-spot for tourists in Yunnan. It has the famous Tropical botanical garden. This garden hosts more than 10,000 species of plants and is a great place for research and education.

For those of you who love hiking, the next destination we can visit is the stunningly beautiful place, called Shangri-la. Also described in James Hilton’s book- Lost Horizon, this place has steep gorges with snow-clad mountains and stretches of grasslands. The main attraction here is the Meili Snow Mountain.

To hire a Yunnan tour guide just fill out the form on this page to request a free quote.

Want to hire an interpreter in Yunnan? Click here!