If you are planning an adventure into Tibet or looking for a Tibet vacation package, then you will need to hire a Chinese tour guide to assist and make your experience an unforgettable one. Travelling to Tibet is an easy process. There are many Tibet tours and travels for you to enjoy, and you can even take a short trip tour package from India to Tibet. Many Indian pilgrims travel to Tibet for its historical and religious significance. You can take a direct flight from Delhi to Lhasa city, which is or 5 hours and 39 minutes.

There are many other amazing tourist attractions in Tibet such as Jokhang Temple in Lhasa, Shigatse, Yamdrok Lake, Mount Kailash and others. In order to explore Tibet better, try to take out a minimum of 3-4 days for the trip.

In order for foreign tourists to visit Tibet, you will need to obtain a Tibet travel permit. This is in addition to your regular Chinese Visa. You will need both in this case.  The only way to obtain a travel permit is through a registered Tibet travel agency. If you are booking a Tibet tour through our website, this is something we can easily provide for you. You may contact us through the forms on this page. 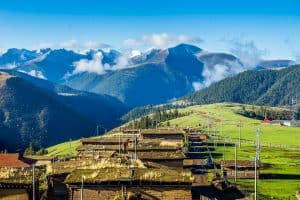 Tibet is a world-famous plateau, commonly known as the “Roof of the world, with an elevation of above 4,500 meters spanning an area of 2,500,000 square kilometers. It is an autonomous region under China and is surrounded by two ranges; namely, the Himalayas running from South to West and the Thanggula ranges in the North. It’s mostly visited by pilgrims and others for spiritual purposes. The place is known for its sacred monasteries and prayer halls with monks chanting all day round. Overall, it’s a quiet and serene place with Tibetans who are strong in their faith, and their level of devotion is unmatched. Tibetans are warm-hearted people with a humbling smile over their face, despite years of political hardships and difficulties.

Tibet was under the Qin dynasty in the earlier years, however after the British overthrew the Qin dynasty in 1911, independence of Tibet from China was declared under the 13th Dalai Lama. In 1949, the communists tried to bring the whole of Tibet that was under Qing’s dynasty under their control. It was invaded by the People’s Liberation Army (PLA) in 1959, and the UN Security Council regarded Tibet to be part of China. But over time, there was drift between the Dalai Lama and the PLA, which led to the exile of Dalai Lama to India. This tension and difficulties still persist today in the lives of Tibetans.

The capital city of Tibet is Lhasa, which is also known as the “City of Sunlight” since it receives the most sunshine than any other place. Being a city rich in Buddhist traditions, the city houses numerous sacred monasteries and magnificent palaces. The city is atop a snow plateau and has a scenic lookout. The marvelous Potala Palace is situated in this city. The palace is 13 stories high with more than 1000 rooms and is the winter residence of Dalai Lamas. A Tibet Tour guide can help you in better understanding the architecture and the significance of various attractions in Tibet. The request for a free quote is on the right of the page, so feel free to fill up I will make your experience in Tibet worth your money and time. 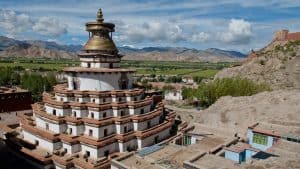 The next place to visit should be the first monastery in Tibet, called the Samye Monastery, located on the north bank of Brahmaputra River. This monastery is unique because if its distinctive mandala(main hall) design. It was built by King Thrisong  Detsen in 779 AD and is a major tourist attraction in Tibet.

The Gyantse Kumbum is yet another popular tourist spot because of its inspiring architecture with golden domes and layered and decorated strips. Kumbum literally means 100,000 images, and you will see exquisite, beautiful paintings inside the building.

For those of you who love adventures and re daredevils, you can visit the “Switzerland of Tibet”, called as Nyingtri. The scenic sights in Nyingtri are filled with ancient trees and beautiful flowers and well-maintained forests. If you are looking for cheap Tibet tour options, then look no further. We can provide you a wonderful experience as the best Tibet tour company.

To hire a Tibet tour guide just fill out the form on this page to request a free quote.