A Guilin city tour combined with a good Guilin travel guide will allow you to understand the stories of the city well and explore the best places during the trip.  The main attractions in the city are the Central Square, Jingjiang Prince city- a forbidden city right in the middle of the Guilin city, the Moon and Sun pagodas and many others.

Booking a Guilin tour package with us will be an amazing experience since this is one of the most famous tourist destinations in China. Its scenic Karst topography is unlike any other in China, which is why tourists flock to this place all year round. It is located on the west side of the Li River and is a city in the Guangxi Zhuang region.

With an expanse of 27,800 square kilometres, it is a compact city and hosts around 3.2 million tourists in a year. The striking features of this city are the four lakes and two rivers and the Karst Mountains that surround the town centre. Tourism is a major source of economy in this city, and hence the streets are kept clean, and the air is free from pollution. The best time to visit is in autumn and spring when the Osmanthus flowers fully blossom in and around the city. Guilin literally means – “forest of sweet osmanthus” because of the fragrant smell that fills the air around the city when it blooms. 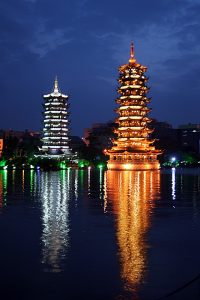 Guilin has a long history dating way back to 10,000 years. This place rose to prominence after the construction of the Ling canal during the Qin dynasty, due to which it became the gateway between the Lingnan region and Central Plains. It was also a noted centre of the Lingnan culture. As you request for a free quote, I will be delighted to take you around this beautiful place and let you experience the best of everything this place has to offer.

A sure thing to do during Guilin day tours is to take a boat ride from Guilin to Yangshuo, along the Li River. The unique shapes and features of the mountains and the crystal clear water of the Li River will enchant your eyes with memories of a lifetime.

After the boat ride, as we reach Yangshuo, you will experience the famous Yangshuo West Street. This street is known for bustling with energy and has paralleled streets lined with cafes, bars, restaurants and shops. People enjoy drinking, dancing, eating and shopping here.

The most popular hill in Guilin is the Elephant Trunk Hill. Located at the confluence of Taohao River and Li River, the hill is shaped like an elephant dipping its trunk. This hill also features Moon cave, Pagodas and Elephant Stone eye. Due to the beautiful scenery, a Guilin photography tour is very common. Guilin tour package Malaysia is often a favorite among guests as well.

Also known as the-“Art Palace of Nature”, The Reed Flute Cave is one of the top tourist destinations in Guilin. It is located in  Guangming Hill and was opened in 1962 for the public. The cave comprises of beautifully shaped stalactites and stalagmites with different alluring colours and shapes.  There are also inscriptions from the Tang dynasty inked in the cave.

To hire a Guilin tour guide just fill out the form on this page to request a free quote.