A city famous for its white winters and snow-clad mountains is the city of Harbin, China. With an area of 53,068 square kilometers, it is located in the northeast region of the People’s Republic of China and is also the largest city in the region. Bookings of Harbin tour guides are very popular throughout the year but even more so in the winter. The city is the capital of Heilongjiang province, which is shaped like a swan on the map.

Harbin is also considered as a pearl on the swan’s neck due to its scenic beauty and location, as it forms the connecting link between North and South Asia along with the regions of Pacific ocean and Europe. Also known as the “Ice City”, Harbin hosts the Grand Ice and Snow festival annually. This is a favorite destination of the many different tours in China.

Harbin is the only city in China with a rich Russian history in itself. The region was inhabited during the construction of the Chinese Eastern Railway, wherein the Russian builders and other personnel settled in the region. It was made as a base by the White Russians as thousands of them they fled from Russia. The population of Russians and Jews who settled here started building the new city’s architecture and buildings and schools. This was how the city was slowly established with time. 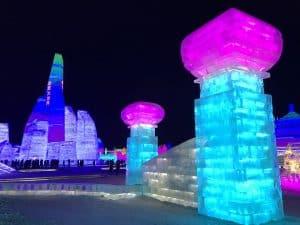 If you want to experience the Ice and Snow festival, then the best time to take a Harbin tour package is during winters. The city hosts the festival from January to February every year. People from all over the world visit the city during this time to enjoy the “Snow Disneyland”  and admire the beautiful ice sculptures in Stalin park. There are also stage performances, ice maze, ice skates and more. There is also the famous Ice Lantern Garden party in Zhaolin Park. A Harbin ice festival tour, is a must if and when you visit this place.

If you are not much of a winter person, then I can take you to see the magnificent St. Sophia Cathedral. This church is more than a century old and noted for its green onion colored domes and European style architecture. It was the main church for the thousands of Russian settlers during that time and was also the largest Orthodox church. I will be delighted to take you around and show many hot spot tourist attractions in and around the city if you fill out a request for a free quote and book a Harbin day tour. I can assure you that you won’t be disappointed.

To exercise the legs, we can head to the “pedestrian only” street, called Zhongyang Dajie. This 1.4 km stretch is like a museum showcasing wonderful Jewish architecture, European building style. The cobbled street also has Russian and Japanese restaurants along with many other food bars.

Harbin has a lot of other tourist spots in store for you. You can experience long and beautiful walks along the Riverbank Park or delve into Jewish history at the Harbin Jewish New Synagogue. A must- visit place for animal lovers is the Siberian Tiger Preserve, where you can hand feed meat to the tigers, ducks, pheasants and other animals.

To hire a Harbin tour guide just fill out the form on this page to request a free quote.