The Terracotta Warriors is regarded as the “8th wonder of the world”, and is one of the most visited tourist places in China. Located 42 kilometers away from Xi’an, this museums spans over an area of 16,300 square meters. If you would like to visit this very special historic museum then you are in luck, we offer Terracotta Warriors tour packages to fit any of your needs. Request a free quote on this page and contact us to get an experienced tour guide who will help make the trip very enjoyable.

History of the Terracotta Warriors

The museum is a must visit for all history lovers because of its rich historical significance and the beauty of its construction. It is recommended to visit the museum on weekdays during morning hours since weekends are usually very crowded. It can also get terribly cold during winters since the museum is underground. 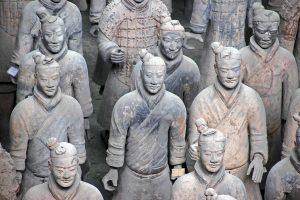 The Terracotta Army was built by Emperor Shi Huangdi, of the Qin dynasty who was also the first emperor of China. During ancient times, the emperor usually built 2-3 armies around their mausoleum to act as guardians, but Shi Huangdi built an entire army of thousands of soldiers and horses to guard him. The emperor was obsessed with immortality, and he probably did that with the thought that these armies would guard him in the afterlife.

The Terracotta Army Museum houses a total of 7000 soldiers, 100 chariots and 600 horses, all in battle formation. The amazing fact about the statues is that no two soldiers have the same face and their height is approximately 6 feet. This museum gives a lot of information about the weapons used, battle styles and formations during that period. The positions of the bowmen, cavalry, archers, officers in command, charioteers and others are all in battlefield arrangement, ready for action anytime.

The museum was discovered in 1974 by farmers who came across a pottery head as they were digging a well. Since then, it has attracted archaeologists from all over the world to excavate and discover this sacred archaeological find. The emperor’s tomb is still left excavated since there are pieces of evidence that point out to traps embedded around the tomb.

A wholesome experience of the museum will be enabled if you have an interpreter and a Terracotta Warriors private tour guide. They will give you the knowledge you seek about the museum and take you around showing the best spots and details that you might miss if you are alone. Fill out the request for a free quote and I will ensure that you will have a lifetime experience as I take you around this incredible museum. You can even opt for audio guides; however, they can be disappointing at times.

The museum is divided into three pits. The first pit is the largest and houses the thousands of standing warriors. Observing each of their positions, facial expressions can take a full day during a Terracotta Warriors tour, but do not forget to see the “warrior hospital” at the back. You can see pieces of statues being restored and assembled together.

Pit two has the statue of chariots, archers, cavalry displayed in glass boxes individually. This allows you to closely inspect every detail of the figure. Pit three is smallest of all pits and is home to the command post with the Generals in their battle positions.

Next is the Bronze Chariot Exhibit that showcases the chariots and some horses found on the west side of the emperor’s tomb.

Many tourists also undertake the Terracotta Warriors from Shanghai. As Shanghai is 1,500 km away from Xi’an, and it takes around 2 and a half hours by flight.

To hire a Terracotta Warriors tour guide just fill out the form on this page to request a free quote.