The best time to visit Shanghai for tourists is typically in the fall between September to November. This would be the most comfortable time of year if coming to Shanghai for tour or travel. Summers in Shanghai can easily exceed 35 degrees Celsius which makes it uncomfortably humid and hot. Thunderstorms and torrential downpours are not uncommon during this time of the year.  The westerly winds from Siberia can make winter damp and cold with temperatures dropping below zero degrees.

Home to a container port that is the busiest in the world and being the second most populous city in the entire world, Shanghai is a tourist magnet. Shanghai is also the world’s financial capital and has often been referred to as the “showpiece” of the country’s epic flourishing economy. The city of Shanghai lies on the Yangtze River Delta and generally has a humid subtropical climate. 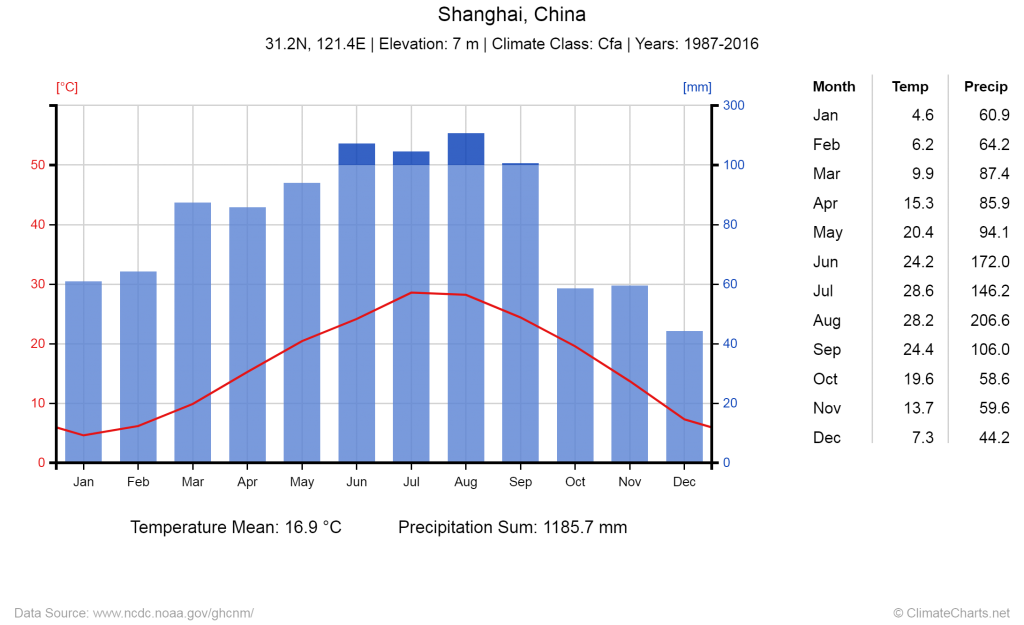 Shanghai Weather In the Fall

Fall or autumn is generally considered the best time to visit Shanghai for tourists. The temperatures will have dropped significantly and so would the hotel and accommodation prices. The rains have gone, and so has the crowd of tourists. Autumn in Shanghai is from October to November.

The temperatures can range from 14 degrees to 22 degrees Celsius. The beautiful cool weather makes engaging in outdoor activities a joy to indulge. From exploring the city sights to watching the changing foliage, there is a calm and unhurried vibe in the atmosphere.

The arrival of the morning dew rests on the maple leaves and transforms entire mountains into a red ocean. It is indeed a sight to behold. Places such as the Shanghai Botanical Garden have various shades of green, gold, red and brown shades from Chinese tallow trees, Callery pear, ginkgo, trident maple, and spindly trees. The ginkgo Trees by the side of Shanghai Concert Hall also turn a magnificent yellow making it ideal spot for photography.

Apart from the foliage watching, a visit to the Nanjing Road, the city’s landmarks such as Nanjing Road and the Oriental Pearl Tower can also be enjoyed in an unhurried and comfortable manner.

Autumn season in Shanghai is also considered the best time to eat crabs. It is because during this season the crabs are at their fattest and therefore, delicious, especially the hairy crab. It is recommended to dress with light layers to adjust to the slight changes in the weather.

Spring temperature in Shanghai is around a comfortable 15 degrees Celsius. It falls from March to May when the weather becomes a little warmer after the cold winter months have ended. It is also considered the best time to visit Shanghai. Rain is less with an occasional shower or two.

The warm weather and the spring rains bring about a wide range of flora, big and small, into bloom. A casual walk down the street would seem like a scene straight out of a movie. The vibrant flowers include peonies, cherry blossoms and peach blossoms. There is nowhere you can be that would not be an outstanding sight.

However, places like the Dongping National Forest Park and Shanghai Botanical Garden deserves a special mention. These places turn to a magical floral paradise which will inspire the dormant artist in anyone. You literally get transported to a world of another dimension.

You can also rent a boat for a ride on the river; enjoy a bicycle ride with a loved one at Century Park at simply walk around admiring the cherry blossoms while capturing stunning photography, even for amateurs.

Springtime in Shanghai is also the ideal time for indulging in dining Al Fresco. A light breakfast or a brunch with friends is most appropriate at one of the many restaurants. You get to eat sumptuous food while taking in the sights and having a great conversation.  Light clothing preferably with sleeves is the recommended clothing for outdoor activities in the spring.

As with all cities in China, it is best to avoid planning a trip to Shanghai during the following days:

The holidays by no means reduce the vibrant charm of Shanghai. However, during these periods, there can be massive crowds as everyone rushes to be home with their family. Prices of hotels and accommodation, as well as flights and other forms of transportation and other amenities, can get pricier.