The best time to visit Shenzhen for tourists is from the winter months to early spring. Which includes the months from October to April. Shenzhen is a metropolitan city in southeastern. Summer months in this city are immensely uncomfortable due to the extreme humidity, torrential rain and high temperature reaching up to 35 degrees Celsius. Summer in Shenzhen is officially from May to October.

Many islands surround the city of Shenzhen. So, the climate is influenced by the Siberian anticyclone which gives it a humid subtropical climate. Apart from the summer which has a bad reputation of being a typhoon season, the rest of the year is when the city can be comfortably visited. 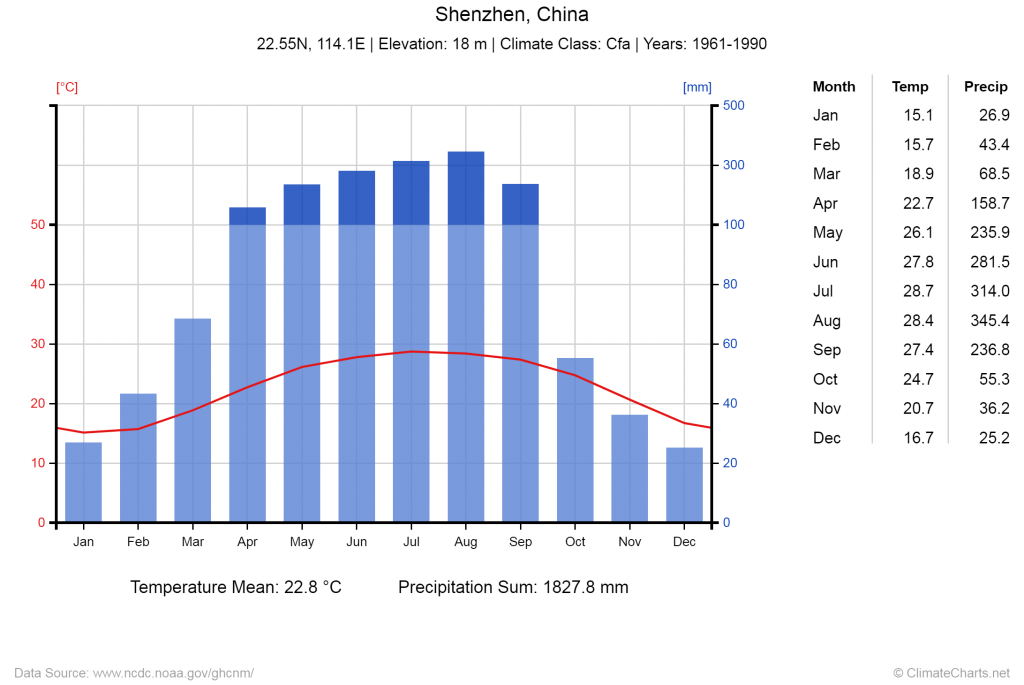 Spring season in Shenzhen is between February and April. The days get progressively warmer with fog a permanent feature with occasional rains. The temperatures fluctuate significantly during this season, but it does not reach higher than 23 degrees Celsius.

The city’s flora becomes the center of attraction with its tapestry of colors. The blooming orchids of Shenzhen Fairy Lake Botanical Gardens and peach blossoms of Lotus Hill Park bring much joy and excitement to all visitors. Admiring, picking and eating succulent strawberries at Phoenix Mountain are also a highlight of many a spring visit.

You will be greeted by fascinating blooms of Sakura, Chinese redbud, rhododendron, Mucuna, and coreopsis to name a few. Shenzhen takes on a beautiful look that can only be viewed during this spring season in Shenzhen. Outfits made of light fabric such as T-shirt, light jeans and shirts are the most appropriate outfit for this visit.

The months from October to November are the fall months in Shenzhen. It is marked by cold temperature and sunny days with dry air. Temperatures can range from 22 degrees to 29 degrees Celsius.

The rich forests of Yangtai Mountain and columns of clouds over Wutong Mountain are a best to see during this season. Hiking up the Fenghuang Mountain, while admiring the scenery and taking excellent photography is a must.

A relatively uncommon feature of Shenzhen is its beautiful beaches. They are the best in the entire country and are an ideal place to paddle board or swim during the fall season. Dameisha beach and Oriental Hawaii or Xiosmeisha beaches are famous while Rose Coast is a perfect romantic spot.

The fall season is also the best time to visit Shenzhen for tourists and to indulge in seafood when they are at their fattest. Comfortable clothing with light cotton clothes and jackets or coats for layering on top is the recommended attire while on a visit to this city.

With temperatures hovering between 13 degrees to 22 degrees Celsius, Shenzhen is very comfortable to visit in winter.  It is recommended to dress light during the day. Light jackets and coat for layering must be kept handy for the night or when temperatures drop.The winter solstice is an auspicious time for the residents of the city. Apart from celebrating traditional festivals, they observe such traditions as eating only cured food.

Winter in Shenzhen is perfect for taking a hot spring bath at places such as the Shiyan Lake, or the Guanlan Shanshui Tianyuan. Another winter activity that is exclusive to Shenzhen is bird watching. In winter, the mangrove forests of Shenzhen bay are thronged by thousands of migratory birds. These include birds such as the egrets and gray heron. These birds congregate in large numbers making it a Shenzhen Bay Park, a bird lover’s paradise.

It is best to avoid travelling to Shenzhen during the National holiday week and the Chinese New Year celebration. During these periods – January to February and the first week of October, finding accommodation and travel modes can be difficult as the entire populace rush to visit their family.

The peak travel season in July is also not the best time to visit Shenzhen. Everything from hotel rooms to flights and other means of transport gets very pricey, and the crowds spill out from everywhere during this time.