Can You Drink Tap Water in Hong Kong? Some Things to Know

Thirsty from your long travels and wondering can you drink the tap water in Hong Kong? Let’s dive in the short answer first to clear things up later: Yes, you can safely drink from the tap water without the need of boiling when you are in Hong Kong. The water hardness is one of the most efficient treatment procedures in Asia, one that matches the international standards set by the USA and Western European as well as the rulings of the World Health Organization. The only risks of contamination in the special region are micro-plastics that can only be found in the pipework of older buildings in China.

Even with that known fact out in the open, the only measure that needs to be in place in these locations is setting a water filter to make sure that the drinking water comes out clean. If you are a tourist in Hong Kong or you plan to stay for a while, tap water is probably safer from you than bottled options. There is a reason for that, and that’s what we meant to cover over the next few lines, so you can be well-informed if you are planning a trip to Hong Hong. 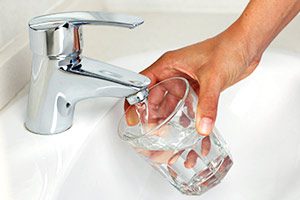 Where does the Water in Hong Kong Come From?

You have probably noticed already that Hong Kong is an island. Therefore they don’t have a fresh water supply to cover the needs of the whole place. Almost 80 to 90% of the water consumed in the region comes from the Dongjiang River as well as other sources located in Guangdong. As it happens with most sources of surfaced water in China, the Dongjiang River has been heavily polluted due to farming activities, as well as the many factories releasing their waste on it.

Some time ago, the Guangdong government started a series of efforts to improve the quality of the water in the river. They have made some considerable advances over the last decade years, but the water in the Dongjiang is not yet drinkable at all. It was Hong Kong who put in place one of the most advanced treatment plants to bring unpolluted, clean water to the island, and they have been pretty successful so far.

So Is the Tap Water in Hong Kong Clean and Drinkable?

If you take the readings of the World Health Organization as the measurable standard, then yes. Hong Kong water hardness is pretty similar to the one that complies with EPA and EU standards. All the water supplied to the networks in Hong Kong is clean and safe to drink. The Water Supply Department of the region does at least 165,000 quality tests a year to make sure that the quality of the water never goes down. All these tests and the reports made based on the information offered by them are available to the public for anyone to see.

So I can drink the Tap Water in Hong Kong?

The short answer is yes, but there are a few exceptions. Allow us to elaborate. As many big populated centers, Hong Kong has an old infrastructure still in place, and many of these building are still lined with metal pipes. Most buildings that were constructed don’t have this issue since they have plastic pipework on them. The old structures, however, can get a few contaminants in their water supply in the form of metals such as nickel, lead, and cadmium. The last reported case of someone affected by these agents happened way back in 2015. To this date, the only issues found in the water of old structures are related to micro-plastics, but letting the water run for two minutes before taking a sip should take away every risk of drinking any of it.

What do the Locals Have to Say about Tap Water in Hong Kong?

As unbelievable as it sounds, a lot of the people living on the island don’t trust the water supply system. For many of them, the incident that reported the presence of metals in the tap water in 2015 is too fresh. Almost everyone recommends boiling the water before drinking it, even though this process only kills bacteria on the liquid and it doesn’t take away any contaminant agents. Also by boiling water, you take away the chlorine used to make it clean. For many locals, it’s much better to have a water filter to pour their drinking water at home.

What Does the Science Say About the Tap Water of Hong Kong?

The last analysis made by the water supplies department of the government of Hong Kong Special Administration revealed that the water in Hong Kong is pretty soft, with an alkaline pH level that goes above 8. The water is also low in calcium, and it has very low chlorine residue. The content of minerals is minimal, such as the recommended intake you can get from certain food in Hong Kong. The only real issue expressed in the last report is that the water runs warm in the tap and it needs ice to be enjoyed cold.

Is There a Market for Bottled Water in Hong Kong?

Sadly, the answer to this one is yes. Due to a very misleading perception, many people in Hong Kong think that bottled water is a healthier option, and nearly half the region only drinks bottled water. As you can imagine, this creates a whole new set of problems related to the environment. Hong Kong is one of the leading generators of disposable plastic. They throw away at least four or five million plastic bottles every single day, according to the numbers of the Environmental Protection Department.

The irony is that most of the bottled water people consume is just filtered and distilled tap water. So you have people paying ten times over the same product they get at home, and they are contributing massively to increasing the amount of plastic junk generated every day. The region doesn’t have any special programs to regulate the use of plastic, and they also don’t have any recycling programs in place. That’s why the government is heavily focusing their efforts in making people understand that tap water is safe and clean enough to drink without problems.