Where is The Glass Bridge in China? Best Locations & More

In August of 2016, the longest and tallest glass bridge opened for the first time. So just where is the glass bridge in China? The Zhangjiagjie Glass Bridge is located in the Northwestern part of Hunan province in the city of Zhangjiajie, China. A lot of tourists make very long trips to visit here each year searching for an ultimate experience and something to remember, and also to get some fantastic photos and memories. The famous skywalk bridge has become one of the most sought-after locations for tourists in China.

A lot of people are just happy to take a picture on an exotic location, but not everyone is content with a selfie. They want to live an experience they can share, something that makes up for a great story about the time they had in these places. It’s a total compliment to your tale if the moments you lived on a location can get you all emotional.

How Many Glass Bridges Are in China?

If you are wondering “how many glasses bridges are in China?” The country has a lot to offer in that regard since six of the most famous glass bridges are located in the mainland. Here is some information about each of them:

There are at least forty glass bridges around the world, but China is the only one who can make a claim about having the tallest and longest one. With a length of 430 meters and a height of 300 meters, the Zhangjiajie Glass Bridge is one of the most stunning attractions in the mainland. If you are asking yourself “who built the Zhangjiajie glass bridge?” the main developer was Haim Dotan, who built the structure to offer one of the best views in the world.

The bridge itself is six meters wide, and it connects the two sides of the Zhangjiajie Canyon located at the Hunan Province. The area is widely famous for being the location of the Avatar animated series, and that’s where the film took place too. The structure has a steel frame that is supported by four main pillars on each extreme of the canyon. The walkway is built with 120 panels of tempered glass, of 2-inch thickness each, and positioned on three layers for safety.

The Zhangjiajie Glass Bridge is famous for being one of the most durable and safest attractions out there. The managing team of the attraction has held events inviting guests to drive cars filled with passengers over the bridge, as well as events where guests get to hit the panels with sledgehammers to prove that it cannot be broken. Even though guests are encouraged to use protective shoe covers, and they are told to avoid running, jumps, or leaning on the railings. 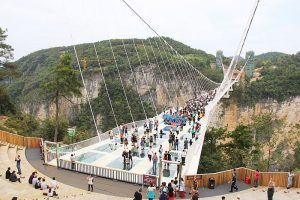 2. The Pingjiang Shiniuzhai Bridge in Hunan

The bridge came to be in 2015, and it’s considered one of the first of the high glass bridges in the world. It has a length of 300 meters, and it hovers almost 180 meters above the ground. The Pingjiang Shiniuzhai Bridge is located on the Hunan Province, and it connects two steep canyon walls. The original structure was made with wood, and it was just meant to be a solution for hikers. It has become a popular tourists attraction since then.

The Pingjiang Shiniuzhai Bridge is called by many the “Brave Man’s Bridge” because it poses a challenge for a way to many people who try to cross it. The place has been lined with a walkway along the cliff-side that approaches the end of the bridge. The attraction also features a glass elevator, to reach the bridge easier without too much hassle. There are also a lot of venues on both sides of the bridge to have a meal or practice meditation.

The Hongyagu Glass Bridge is located at Hongyagu Scenic Area, right in the Hebei Province. The bridge links two peaks, and it has an extension of 488 meters and 4 meters wide. It’s also one of the latest attractions to open since they have been offering their services since December of 2017. It’s recognized as one of the most thrilling locations with some of the most helpful staffs to take care of their guests.

The Hongyagu Glass Suspension Bridge was built using suspended cables to hold the structure in place, the bridge itself is lined with 1,000 glass panels, give or take, each one bearing a four-centimeter thickness. It can comfortably accommodate 600 people at the same time. This is one of the most serviceable attractions out there since it has a lot of staff in place to help visitors who may experience vertigo or sudden bursts of fear.

The Yunyang Longgang Bridge has the honorable mention as well as the Guinness record of being the world’s longest overhang glass bridge ever built. The thrill that most visitors get out of it is from walking out on a place that seems to end midair. The project came to be in 2015 when a u-shaped, glass-bottomed cantilever bridge was built and opened to the public on the Yunyang Longgang Geological Park, located the center of the Three Gorges Reservoir Area in Chongqing. You could call it an expansion of sorts of the original project.

The developers’ saw the potential to go even further, by building another cantilevered bridge, this time it would be the longest in the planet. The sight is pretty intimidating for many but also quite exhilarating. This time the bridge is A-shaped, and it measures 85 meters from the cliff wall and 200 meters at ground level. The park officials are very conscious about safety and only allow 30 people to walk on the bridge on any given time. Guests with the guts to reach the apex of the ‘A,” will experience air suspension with a magnificent sight to behold and a memory that will never leave their minds.

5. The 3D Glass Bridge of Ningxia

The Glass bridge of Ningxia is one of those initiatives that turn out for good once someone puts a little imagination behind a practical fix. This bridge came to be as a wooden structure created to solve the crossing of the river at Ningxia back in 2004. It was 2.5 meters wide and 329 meters long. It became a tourist’s attraction in 2017 when the wooden panels were switched for glass panels that hover just 10 meters high from the river below.

There are two 60-meter sections of tempered glass, both of them bright and well-layered to allow visitors to look down at the rushing brown waters of the Ningxia River. But there are also two additional 75-meter sections that feature 3D scenes that are cleverly painted on the glass layers that are aimed for tourists. The scenes feature images that make the visitor feel like if they are perched above a steep, or in a rushing waterfall, or staring down into a dark canyon.

6. The Suspension Glass Bridge in Guangxi

You certainly can’t have beauty without going through some hardships, and the suspended glass bridge of Guangxi certainly follows that philosophy. This bridge is famous for being one of the most challenging spots to reach on the Shuanglonggou virgin forest resort. The place is the main crossing path on the Shuanglong Ditch Primeval Forest. It is regarded as one of the most beautiful glass bridges in China. It has a length of 200 meters with an additional 52 meters that go deep in the valley. It’s a famous outpost for Yoga enthusiasts and hopeless romantics who love to hand over marriage proposals in the bridge.

Glass bridges are certainly one of the most thrilling spectacles you can experience when you make a trip to China. Make sure to make a reservation to visit at least one of them. Now that you know where is the glass bridge in China, you can visit them freely to make lasting memories. They are truly a sight to behold.