How Much Does a Meal Cost in China? Managing Expenses

A well-planned travel to China should always include money for meals. A lot of hotels offer their services at in-house restaurants, but most of the times you ‘won’t get the whole experience of Cantonese delight in these places. You would be amazed at how cheap it is to eat outside and far away from tourist outpost. Not only you get to taste authentic Chinese cuisine, but you also get to save money as well. So if you are wondering just how much does a meal cost in China, here we break it down for you.

Let’s break down the averages to give you some context. Food prices in China are very low; the average cost per meal of a Chinese dish is ¥15 RMB for three courses during the day. You can expect to spend no more than ¥5 RMB to ¥10 RMB for a breakfast meal. A full lunch can range from ¥18 RMB to ¥20 RMB. Dinner can also run around the same cost or a bit more if the patrons choose to drink liquor with their food, something that a lot of people do if they eat out after work.

We are not talking here about light servings either. A full breakfast usually includes noodles, soup, meat, and eggs. Lunches typically include a lot of chicken, duck, chestnuts, garlic, and local vegetables, as well as rice. Dinners also include dishes that don’t go easy on the stomach even if they are being consumed so late at night (dinners are served at 8:00 pm in a lot of restaurants.) As we mentioned the cost of food in China is low, but you can expect, tourists areas to increase the ´rice of these dishes three to six times their actual value. 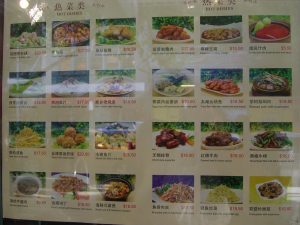 One of the most significant price inconsistencies that have been reported in sites like Tripadvisor happen in places such as Guangzhou, Beijing, or Shanghai, where tourists have reported that dishes served in restaurants out of tourists outposts are way cheaper in comparison. A patron reported a dinner for two with a cost of ¥300 at his hotel while the same meal with fresher ingredients was only ¥40 in a place 20 minutes away from his hotel. It takes some time, patience, and learning, but you can get to taste the authentic flavors of the country if you know what and where to look for.

Naturally, first tier cities like Beijing and Shanghai will have more expensive food and restaurants. Other cities such as the restaurants in Xiamen can be often cheaper depending if you are eating local. Expect to pay high prices for western style food no matter what city you are visiting.

The Overall Cost of Eating in China

We have gathered some information regarding this topic from many sources around the web. This guide is meant to help you have some perspective on how much money you should expect to spend on meals if you try different places aside from the usual spots that tourists frequent. Keep in mind that in regular restaurants the food is way more fresh than in tourists outposts, they usually cook for you instantly since they don’t have freezers to keep pre-cooked meals to reheat. Most would tend to avoid eating pre-cooked meals.

You can expect to spend from ¥5 to ¥10. One of the most traditional dishes served at breakfasts in China are noodles, dumplings, rice congee, and steamed buns. You can go with one option or combine a couple of them to have your fill. A bowl of noodles with a serving of steamed buns will run you at least ¥10. There are cheaper options such as dough sticks with soy milk, or rice porridge, that costs around ¥5.

You can go with a Western breakfast in the mainland, although we wouldn’t understand why you would choose to eat the same things you can have at home. Most options offered in bakeries that include bread, cakes, yogurt, or milk will run you down at least ¥10. A full Western breakfast, including eggs, bacon, or pancakes, will cost at least ¥40. A regular cup of coffee can be found for ¥7 for instant options ¥40 for artisan brands.

As we mentioned earlier, a hearty meal can be had with ¥20, but if you want to go to fancy locations, a meal for one can run you down at least ¥80. The most basic dish contains rice or noodles since both are the main food staples in the mainland. Most people prefer a serving of noodles or rice with additional plates on the side. Most of these dishes are combined ingredients such as beef, chicken, duck, or fish.

There is also the option of having hotpots, a very popular dish in China that combines many ingredients, and most of them are customized by the cooks of the place you choose to eat. A small family restaurant usually charges no more than ¥30 for a well-made pot. Upscale restaurants will charge at least ¥80 to ¥100. As we mentioned earlier, small places typically buy the ingredients they will use over the day, so their food is always fresh. Restaurants can be a little trickier about this. 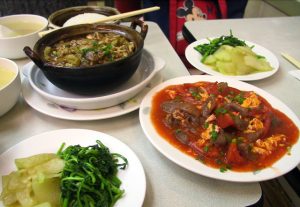 You can find a lot of snacks in China at really good prices. There is almost one vending machine of snacks at every corner on tourists outposts. You can find them on corner stalls that are usually packed with people. There are also a few tourist locations that have snack streets, such as the Ghost Street located in Beijing or the City God Temple Street at Shanghai. It’s easy to find a lot of pre-packaged stuff but also natural offerings of Chinese toffee apples, and sugarcoated haws. As for the rest of the flavors, you can try, there is a lot to please your taste buds. From sour flavors to stinking treats made of tofu. The average price for a snack varies from ¥2 to ¥10.

It’s safe to say that the overall cost of any drink in China is at least half the price they have in Western regions. The least expensive bottle of mineral water costs about ¥2 for a 500 ml bottle. A bottle of soda with the same content costs about ¥5. The most expensive bottle of beer costs about ¥10. China is has a knack for offering processed drinks with a lot of flavors that range from the usual to the outright bizarre. Most of these beverages will cost from ¥5 to ¥15. A cup of coffee will usually cost between 7 to 40 RMB depending on where you buy.

You can find a lot of Western franchises for fast food meals over China. KFC, McDonald’s, and Burger King have many establishments ion the big cities such as Guangzhou, Beijing, or Shanghai. The price of a regular mail in these places is not so different from their American counterparts, with the costs of the most expensive combo averaging ¥40 while including the main dish plus fries and drink.

The Chinese are short on their own options for fast food. Their offerings, however, are more centered on their traditional dishes cooked and served instantly in small locations at the roadside. Most of these joints are usually packed at rush hours when employees are on their lunch break. While the offerings may seem nutritious because they contain vegetables and other traditional Chinese ingredients, they are regarded as the counterpart of a western hot dog stand, meaning that ‘it’s not the best option you can have or at least not something you should eat too frequently. ¥20 will get you a lot of food in these places.

Is it Rude to Tip in China?

If you are wondering if it is rude to tip in China restaurants, let’s just say that it is not necessary at all since they include the cost of service in the price of their dishes. In mainland, tipping is not common at all and not recommended. Some people say Chinese may be offended by tipping, but mostly they will just seem confused by it more than anything. However, in cities like Hong Kong and Macau, tipping is more common and can be accepted more freely.

Hopefully now that you read this you will no longer be wondering how much does a meal cost in China. You will be more prepared for your journey and know how much money to budget for your trip. Leave a comment below if you have any questions about food prices in China.