Top 8 Things to do in Guangzhou at Night

Guangzhou is one of the most prosperous cities in mainland China, a big metropolis that has a lot of options if you are seeking entertainment options. There are many fun and adventurous things to do in Guangzhou at night. It’s hard to know what to do first, so let’s take a look at some of the best things you can do to have a great Guangzhou nightlife experience. Although there are lots of fun and interesting things to do, we will cover 8 of the more popular choices among tourists.

The Canton Tower is one of the landmarks of Guangzhou. It’s also one of those places you must visit even if you are on a business trip. Currently, the building is the highest tower in the mainland and probably the tallest edification in Asia. The recorded height it’s of 600 M. This is not exactly a place to watch birds fly, but there are a few things you can do on the highest levels of the Canton Tower to have a great time.

You can take a ride on the horizontal sky wheel Bubble Tram and get a full view of the city. Also enjoy the Spider Walk, a transparent spiral ladder that will challenge your notions of vertigo. You may also visit the Sky Drop, an attraction where you enjoy a 30 M fall at 485 meters over the city. Remain on the premises and enjoy these attractions until 10:30 pm. 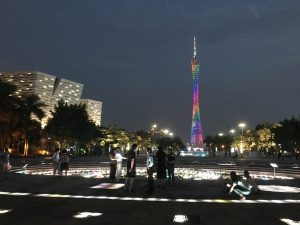 #2: Take a Night Cruise on the Pearl River

The Pearl River is considered the third longest river in China. It covers an extension of nearly 2,000km and it is composed of a few side inflows such as the Liuxi River, the Xi River, the Dong River, and the Bei River. The current flows converge on Guangzhou to become one of the best attractions in the city. If you choose to cruise the Pearl River at night, you will get a whole different view of the city. The sights of the Canton Tower and the entire skyline of the city merges with the fantastic view of places such as the Haizhu Square. There is an excellent arrangement of neon lights to make your visit memorable.

#3: Take a Stroll in Yuexiu Park

Yuexiu Park is one of the few locations you can visit for free things to do in Guangzhou. It’s the largest park in the city and the main natural landscape as well. If you are looking for some classic v memories, you can search for the Five Rams Sculpture, one of the most prominent monuments in the city and a traditional symbol of it. The park itself is vibrant with green life, and it houses the city’s municipal museum, some of the best public sports and recreational facilities, and a flower exhibition hall. All the attractions in the park are open up to 10:00 pm.

Shamian Island is a well-known tourist outpost in Guangzhou because it has some of the most beautiful and well preserved ancient architecture in China. The streets are fully adorned with many statues, fountains, pavilions, and wooden chairs. There are at least 150 visiting locations of diverse influence on the island that feature baroque, gothic, and neo-classic styles, some of them with heavy westerns influence. One of the more interesting things to do in Guangzhou at night. The island is also known for being a favorite for people who love social engagements since there are a lot of bars and pubs with diverse themes to make the Guangzhou nightlife more vivid and rich. 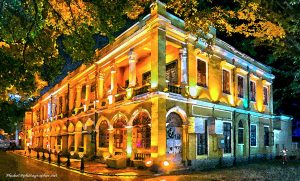 #5: Go to the Guangzhou Bar Street

If you are a drinker, or if you feel like spending a good time on a spot that offers alcoholic beverages, you can hit one of the many locales of the Guangzhou bar street. The newest one is Bai E Tan Bar Street, located at Chang Di Lu. This street is part of the Fang Cun Village that belongs to the river bank, with Bai E Tan being the conjunction spot of three branches of the Pearl River. The other place is Yan Jiang Lu, a historic street located west of Ren Min Nan Lu in the Yuexiu District, at the east side of Beijing Lu. The last spot is the Huan Shi Lu bar street located right at the center of the city.

Compared to the other two bar streets, this one is way less upscale and busier than the other two streets since a lot of blue-collar employees, and working types come here to blow off steam after a hard day of work. These streets are the epicenter of the Guangzhou nightlife. Going to the bar streets is one more of the more popular things to do in Guangzhou at night which many foreigners living in Guangzhou as well as tourists quite enjoy.

#6: Shopping in the Wholesale Markets

Guangzhou is alive because a lot of commerce happens on it at all moments. The city has the most substantial quantity of wholesale clothing markets in the country. Every day, a lot of businessmen from every corner of the country come together to these markets to buy and sell a lot of clothes. Shopping in places like this really compliments the Guangzhou experience, the best places to visit are the White Horse Clothing Market, the Huimei Garment City, and the Zhanxi Market.

Visiting the electronic markets are also very good for finding the latest tech if you are into that more. It’s really one of the more favorite things to do in Guangzhou at night. We encourage you to visit as the evening falls, while a lot of the hottest pieces will be gone, a lot of merchants will be offering incredible bargains on what they have left since they don’t like to bring the merchandise back home.

#7: You can Visit the Changlong Night Zoo

Changlong Night Zoo is known as the second night-attraction of its kind in the world. The first one was built in Singapore some time ago. Is the first night zoo built in China, and it houses at least 10,000 animals and over 300 different species within its walls. The place is divided into several theme parks. The Performing Square is the most prominent location of the site, capable of holding an audience of 12,000 people.

The setting of the square resembles a circus, with artists from all over the world taking turns to present their acts. The zoo is considered one of the greatest outlets for the animal performance of the XXI century, something that doesn’t escape controversy as you can probably imagine. The installations are considered rather large, so it is best to move around using the train service between attractions.

#8: Have Some Fun in the Chimelong Tourist Resort

The best way to describe the Chimelong Tourist Resort is to compare it with Disneyland without the theme. The complex is built to house quite a few theme parks such as the Chimelong Paradise, Water Park, Safari Park, a Birds Park, and an International Circus. The Chimelong Paradise is considered one of the largest amusement parks in a world with an extensive selection of top-rated amusement facilities. The Safari Park, as well as the water park, work under basic rules to guide visitors through their open attractions and the International circus offers spectacles that rival the ones offered in the Changlong Night Zoo.

This concludes our list of the top 8 things to do at night in Guangzhou. If you feel we have missed something or if you would like to make a suggestion for another fun and interesting thing to do, please feel free to leave a comment below.